Civil Servant of the Year Award for 2019 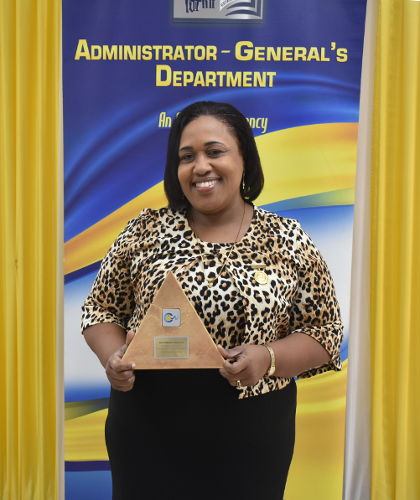 The Administrator-General’s Department is pleased to announce that Mrs Sophia Levy, Customer Service Officer of this Department was awarded Civil Servant of the year 2019 in the Middle Management category.

There are three awards this year in the following categories: Technical Support, Middle Management and Management.

Sophia joined the Department in July 1987 as a Temporary Clerk and in 1988 was appointed Clerical Officer III. She was later appointed as an Accountant in 1995 and confirmed as a Trust Accountant in the new Executive Agency in April 1999.

The Agency recognised Sophia’s ability to deal effectively with customers and in October 2009 she was assigned to the post of Customer Service Officer. She has excelled in this position, calmly and competently dealing with grieving beneficiaries.

She demonstrates a caring and positive attitude at all times and is polite and respectful. Sophia carries out her responsibilities professionally and judiciously and is an eloquent speaker. She is also an ordained Deacon in the Kingston Seventh Day Baptist Church.

We are extremely proud of Sophia! Minister of Justice and Attorney General, Senator Dorothy Lightbourne, has lauded the work of the Administrator-General’s Department (AGD), which has made significant strides as a protector of beneficiaries of estates.

“You have truly embraced your role as the protector of beneficiaries of estates, both young and old. The welfare of our young, in particular, is of paramount importance to all who govern and one of the major functions of the Administrator-General’s Department, is to safeguard the interests of minor beneficiaries and in so doing, nurture and foster their development,” she said.

The Minister was addressing the AGD’s Retirement and Long Service Awards function, in Kingston recently.

“Through your efforts over the years, you have moved from closing 300 estates in 1998 to an average of 750 in each subsequent year,” Senator Lightbourne said.

“You have administered intestate’s estates and several Charitable Trusts, some dating back to the early 1990s. You continue to manage estate funds, which are invested in Government Securities. The investments, I note, are pooled in a Common Fund, which now stands at over $1.4 billion,” she added.

The Minister also praised the AGD for its use of technology, in expediting cases on their clients’ behalf.

“In addition to the many varied skills of staff members, you have sought to use technology as a means of performing your duties more expeditiously and many of your processes are already electronised,” she pointed out, while highlighting the Department’s Trust Processor software, which assists in increasing the speed with which beneficiaries are able to obtain financial information.

According to the Minister, the AGD has attempted to address the issue of backlogged files with some 2,500 backlog cases being addressed, and the remainder to be dealt with by staff, during regular working hours.

In the meantime, the Minister is emphasising that there is a need for the Department to improve its public education output.

“I see the need for educating all sectors and persons in the society, as males make up the majority of the over 9,000 cases currently in the Department. Some 1,250 estates represent deaths caused by motor vehicle accidents, while deaths of police officers account for over 300 of the total number. You will, I note, intensify your public education drive in 2008/09 and target the various groups, entities and communities throughout the island, advancing the need for proper estate planning, which is very, very important,” she pointed out. The Administrator-General’s Department (AGD) of the Ministry of Justice, on October 30, honoured some 50 current and former employees at a Retirement and Long Service Awards ceremony at the Jamaica Pegasus Hotel in Kingston.

The ceremony, the first such in the agency’s 135 year history, saw 43 current employees and seven retirees, who have served the agency, for periods ranging between five and 35 years, being recognised.

In her address, guest speaker, Minister of Justice and Attorney General, Senator Dorothy Lightbourne, Q.C, commended the retirees for their sterling contributions, and urged the honorees, still employed to the Department, to continue their outstanding service.

“To those of you who are being recognized this evening for long and dedicated service to the Administrator-General’s Department, I urge you to continue to serve this organisation and this country with pride and integrity. Continue to shape and mould the lives and future of those beneficiaries, who you have given a chance at a better and brighter future, because of how you manage and invest their funds, and how efficiently estates are closed,” she stated.

Senator Lightbourne commended the AGD for recognising the awardees for their 677 cumulative years of service, describing it as “an accomplishment and.. testimony to the commitment and dedication of your outstanding honourees.” She also had encouraging words for the retired staff.

“Retirees, for you, this. marks the culmination of 194 cumulative years of service to your country. What could be more fulfilling than knowing you have helped to form the character of many young children or the knowledge that you have had a positive impact on somebody’s life, and that you did your best. The (remaining) awardees are now charged to continue thinking creatively, to continue the outstanding work of the Department,” Minister Lightbourne emphasised.

In the meantime, the employees expressed delight at being recognised by the Department.

Retiree, Elsie Walker, who was honoured for 40 years of service, described her experience at the agency as “great”.

“This is my university. I learnt everything here,” she said while noting that she experienced immeasurable joy during her tenure.

Another awardee, Gay Clunis, advised that she spent 38 years at the AGD. “It’s been a wonderful experience. I don’t regret one moment of it. Just for a client to say ‘thank you’, gives me satisfaction,” she stated and urged other civil servants to carry out their duties to the best of their abilities.

The AGD was established in 1873 to satisfy the need for a duly authorized office, to take charge of the property of persons who either die intestate or without appointing an Executor, or who appoint an Executor who refuses to execute his or her duties.

Over the years, the AGD’s role expanded to incorporate handling, almost exclusively, all intestate matters of minority beneficiaries, under 18 years, in fulfilment of their mission, “to protect the interests of minors, beneficiaries, and creditors of the estates”, which the law requires the Department to administer.